After the end of the Azria’s Evil Plan, Reiko lost her 2 minions Purple Shadow and Purple Jack. She hunted to find successors.

After one month of track. She was invisible in shadows near her target. She looked in silence Reiko23 fighting a superhero. Mr. Steelcrusher hit Reiko’s body again and again and smashed her on the road but the robot woman stood up and smiled.

Steelcrusher: “I don’t understand I can crush a tank but you …”

Reiko smiled and fired a purple beam. He was not able to dodge. He fell on his knees and screamed in pain. He gathered his last strengths then jumped on her. He hit her as hard as possible but she blocked his monstrous attack with one hand covered by a purple aura.

Reiko used her telekinesis power to lift him. She took a strange device and threw it. Purple ropes appeared and bound him. She flew to him and smiled. She kissed him. Unable to resist, nanomachines entered in his body.

Steelcrusher: “Noo … what have you done? Something in me … I feel a heat invading my body”

Reiko: “My nanomachines are in your body. They spread in your whole body, each nerves, muscles, tissues will be slowly turned into electronics, cables and synthetic fabric. You become a machine, better, stronger, faster … under my control”

Reiko: “…then your mind is slowly digitalized. Your soul becomes a program.”

Reiko: “I met stronger and more resistant. Let the process turns you into robot. You’ll like that.”

Steelcrusher: “I feel so good … so good.”

A blue energy sword pierced her body from behind. Her body convulsed as some behind her moved the sword. Reiko jumped away and turned. She had difficulty landing on her feet. She saw a cute Chinese girl. Her attacker wore a black skintight sleeveless top and black skintight leggings. She uses a strange energy sword. She loaded data about Ying Mai.

Reiko fired a purple plasma rifle. Ying moved her sword behind and absorbed the plasma energy. Reiko followed her attack and kicked her head but Ying dodged and slashed again Reiko’s body.

Reiko continues to attack her and feinted a punch then she griped her neck. Ying was shocked as the mighty robot strangled her.

Reiko: “you damaged me … I congratulate you. You have an interesting weapon… “

Steelcrusher: “My last action as a free heroes …”

Steelcrusher bear hugged Reiko from behind. Ying was freed. Steelcrusher was not strong enough. Reiko opened her arms and freed herself. Reiko turned to dodge Ying’s attack from behind. Reiko blocked a kick from her attacker, then a punch.
Ying feinted a kick then hit Reiko’s midsection with her knee.

Reiko: “She had copied my skills …”

Ying continued to attack Reiko again and again. It was easier and easier to hit the damaged robot.

Reiko had no choice but fired plasma rifles to defend herself. Each time Ying absorbed them with her sword.

Ying: “Thanks you charged my sword!”

She moved very fast behind Reiko and pierced her body with her energy sword.

Reiko fell face on the floor motionless. Ying looked her prey and smiled.

Ying: (in Chinese): “Yes master … she is at my feet. I’m waiting the helicopter”

Few minutes later, a helicopter ladder fell. She grabbed the defeated and motionless robot and a ladder’s bar. She disappeared in the skin with her prey.

Few days later, Ying Mai received an email.
“We succeed to extract technology and data from Reiko23. You have to test our new weapon on Astro Girl and kill her.”

Ying moved to the triad’s lab. She knocked at the lab boss’s door.

Reiko: “How? I have to be honest with you. I let you capture me to know your employer. All of guards and scientists, all of their bosses are my robots now. Don’t blame yourself; it’s not your fault. You have an impressive potential but your flesh and bone body is a limit. You’re now a soldier, an assassin without master … I offer you to become my assassin. You’ll chase more powerful behinds …”

Ying: “You’re nothing but a pile of scraps … an advanced toaster!”

Ying became invisible. Reiko blocked her sword with one hand and smiled.

Reiko: “You surprised me … but now you can’t anymore, I’m prepared to fight you. I’m a robot, a new form of existence. I can feel pleasure, pain, love, hate … I’m not a toaster. ”

Reiko hit Ying’s belly with her palm. Ying flew away and hit hard the wall. Reiko was just in front of her.

Reiko: “you’re so beautiful and powerful … you’re lost without your old pathetic masters. They failed …”

Mr. Chong Tsu entered in the room. Reiko snapped her fingers and he exploded.

Ying phased and jumped behind Reiko but the robot disappeared. Ying felt a terrible pain behind her knees. She fell on the floor.

Ying : “You killed my master.”

Reiko : “His arrogance and ignorance killed him. I just pushed the trigger … like you.”

Ying stood up. Her last fight against her was recent enough to remember and copy Reiko’s fighting skills. She feinted a slash with her right hand and she teleported her sword in her left hand to pierce Reiko’s body. Reiko smiled and blocked the sword with 2 fingers easily. The powerful robot didn’t see that Ying stuck a bomb on Reiko’s flat belly.

The bomb exploded and Ying phased. Reiko was thrown away trough a wall. Ying jumped to pierce Reiko’s chest but Reiko was not damaged by the explosion. She easily dodged the Chinese assassin attack and grabbed her from behind. Ying was not strong enough to break the hold.

Reiko whispered to Ying’s ear: “I like you and I offer you to continue to hunt and fight … but for me. You respect power like I do … let me become your mistress.”

Reiko threw Ying on the floor and stepped in front her.

Reiko : “Take my hand and embrace a new exciting existence. Your old masters were pathetic, weak and stupid. They didn’t deserve an assassin like you. You’re a master piece … come with me.”

Reiko: “your best choice, ever!”

Reiko kissed Ying passionately. After few minutes Ying May was no more and became Purple Assassin. Her skin become a shining purple synthetic fabric. Her face became more Japanese. She felt so good.

Purple Assassin: “Thank you … I feel good, so good, so powerful … thank you mistress.”
Reiko smiled and hugged the beautiful Purple Assassin.
Reiko: “A master piece, so perfect, you’re reach perfection … You were excited to hunt Astro Girl then we, together, will hunt and capture this kryptonian girl”
Purple Assassin smiled. 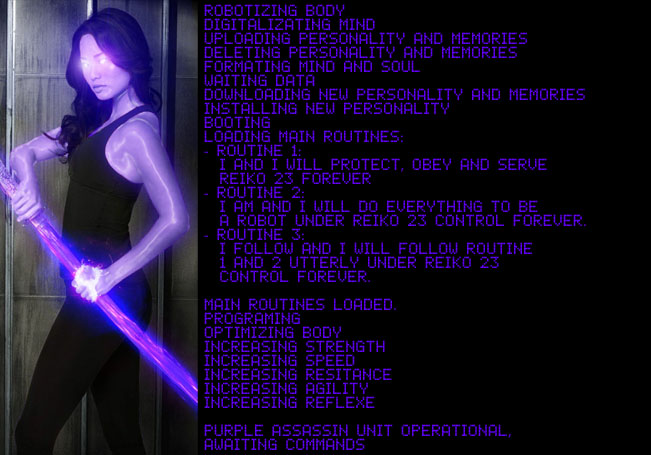 I will post soon the Purple Assassin profile and an updated Reiko23 Profile.
Comments are welcome.
at Friday, August 05, 2011