Metallia in Anya's body continues her crusade against heroine and villainess.
Anya trapped in Azria's world is totally helpless to stop the wraith's plan.


Metallia hid the lasso under her long blond hairs. She rode her new motorbike to the FastSilver office. She called Mr Jefferson Fast Silver Coe : "I want to see you now! I'm coming!"

She entered and smiled. "Hello! Where is Metallia statue?"

Jefferson pointed a door. Metallia opened the door and looked her old body statufied. She grinned and though "Anya was trapped in and her mind must be annihilated now!"

She took the statue and used a curtain to hide her former body.

She walked toward the scared Coe. She accelerated and used her synapses lock power. He was paralyzed. She walked slowly behind him and wrapped the lasso around him.

"Mr. Jefferson, this is an advertising project under the curtain. You forget everything about all events happened here involving Anya Storm, Metallia and Azria. Nothing happened … You will raise my salary as the muse of Fast Silver and you'll be kind with me now. Understand. Thanks for this gift …"

He nodded under the control of the lasso as his mind was altered. She left the office and came back home.
"I'm curious to know something…"
She put her hand on an outlet and drained electricity. She was overwhelmed by pleasure. She tried to resist, it was hard too hard. It was so good. Fuses blew. She lay on the floor in ecstasy.
"It was so good … I like my new body …"

Azria : "Amazing …let me try"
Azria grabbed Anya crotch and sent electricity. Anya resisted during a minute then she succumbed to pleasure. Azria increased the electricity flow the stopped just before Anya orgasm. The evil wraith laughed at the sight of the naked heroine at her feet.
Azria : "Do you want more? … yes I read it in your eyes … they 're begging for more …"
Azria knelt beside the heroine bruised body and slid her pale hand between the heroine tights. Anya's body quivered. Azria laughed : "You're a slut … you don't deserve it"
Anya moaned and lay at her feet.
---

Metallia stood up and took the statue in her new secret lair. She removed the curtain and looked her former body. She caressed the cold metal curves.
"I were slender and sexy …" 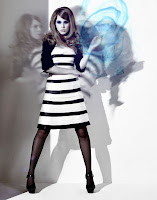 Azria : "Maybe you prefer to came back at your right place"
Anya was trapped in the statue. She saw her body caressing her metallic curve, she liked that.
She liked to be admired, being a statue for ever pleased her. Her soul moaned to be a statue, admired and caressed. Suddenly Anya was pulled at Azria feet.
Azria : "You're strange … you're a slut … anything for pleasure. You don't deserve pleasure" She laughed and she sent powerful waves of dark energy. Anya quivered and screamed in pain then she lost consciousness..

Anya felt cold on her body. She woke up and she was wet. She felt pain from all fibers of  her behind. She saw 2 women. She rolled back.
Azria : "I hope you had a good rest because Metallia has turned into statue 2 more women. They made a pact with 2 succubus. Let me to introduce you Marina Higins and Monica Travoli. Don't forget the rules!"

Anya stood up. Her powers had been neutralized, she felt water on her torso and she saw the bottle in the Marina's hand. Her body was half bruised. She though "It's insane, powerless and wounded … I have to fight these demoness …"

Azria :"Yes you have to fight … you can give up and save strength for the next challenge! I can read your toughs … I already drained a part of you for good. … enjoy your fate!"

Marina moved very fast to kick Anya's face. Anya stepped toward and dodged. She grabbed Marina ankle and turned on her left. She twisted Marina's foot and used the demoness's strength to throw her onto the ground.

Azria : "I don't believe it, you still able to fight!"

Monica slid behind the heroine and planted a finger in Anya's nape. Anya was totally paralyzed.
Monica : "I control you movement now!"
Anya floated in air and spread her legs. Marina pressed her warm body on Anya body. Monica pressed her body on Anya's back.

Marina : "You look like an angel, this cute face … but you're just a woman … I feel your heart beating faster … we will ravish and ravage your tiny body until you die."

Anya left something growing between her legs and on her ass and penetrating her. Marina kissed Anya and filled the heroine mouth with a warm liquid until Anya swallowed.

Marina : "good girl … these pheromones will turn you into a mindless slut"

Anya slowly lost her mind, totally overwhelmed by desire. The 2 succubus fucked and ravished the blond heroine again and again. Anya had stronger and stronger orgasms while her body became weaker and weaker. She didn't know how much time, how long … She was just a rag doll of lust and pleasure but she didn't want to die.

The demoness lost patience. They released the destroyed heroine. Anya didn't fall and stood up.

The demoness produced giant scorpion tails. Anya stood up on her weak legs and looked down. Her face was covered by her wet long blond hairs.

Monica : "her heart continue to beat … she doesn't want to die …  I suggest you a game. If I pierce her heart first I keep it … and if you …"

They raised tails. Monica nodded. They ran to pierce the heroine chest. Anya's body moved and made a quart spin at the last time. Her hand crossed moved fast on tails then she guided the tails move. Monica's tail pierced Marina's throat and Marina's tail cut Monica's throat. They were totally surprised by Anya's move. Marina's mortal body fell and died. Monica pierced Anya's slim belly with her tail before she died too. They disappeared in a strange smoke and entered in Azria. Anya opened sharply her green eyes as the tail was piercing her belly. She fell on her knees. She lost blood.

Azria was surprised : "Incredible … but look at you are about to die and your next opponent … hooo look Metallia is about to fight Jessica … if I were you, I'll get ready to face Jessica soon my little slut!"

Anya fell on her knees unable to move. She lost more and more blood.
During this time …

Metallia fired a chain lightening to destroy a door and she entered in luxurious room. Jessica sat in a comfortable armchair.

Metallia covered her body with lightenings and accelerated. She surprised Jessica and lightening punched her head. Jessica flew and crashed into wall but she stood again and blocked Metallia kick.

The demoness moved fast and punched Metallia's belly but Jessica crushed her fist on Metallia's metallic belly. Metallia fired a chain lightening. Jessica screamed in pain and sent a red lightening shock. Metallia was overwhelmed by pain but she didn't scream guided by her hatred.

Jessica slowly stood up : "What have you ate? New costume?"

Metallia was surrounded by 3 Jessica's clones. Metallia was not skilled enough to dodge every attack and not fast enough to harden all part of her new body. The 3 Jessica hammered Metallia with punches and kicks. A Jessica succeed to put her hand on Metallia's blond head and used the Red Demonic Control Palm. Metallia was not ready to fight a such rush of feelings. She stopped to struggle and fight.

Jessica : "This new costume is resistant but cumbersome … undress sugar !"

Metallia stood in front her nemesis but her body was under Jessica's control. Metallia unlocked her outfit and let the 2 other Jessica undress her. Jessica gathered her doubles and kept her hand on Metallia's head. The demoness began to drain Metallia's new powers.

Metallia fed by hatred and angry. She regained enough strength to control Ultrawoman's lasso to tie up Jessica. Jessica tried in vain to struggle. "NOOOOoo"

Jessica fired a Red Lightening Bolt that hit Metallia's metallic body. Metallia returned in her human form. Metallia used her link with her dress (remember she had merged her black dress in Anya's outfit) to get dressed again with her outfit. She used her power of her dress. Combined with the lasso's power, she took control on Jessica mind. Jessica tough "She is soo cute … no … so perfect … I don't want to fight her …"

Metallia altered Jessica mind and freed her. The artifacts' powers were too strong. Jessica knelt.
Jessica : "Anya … Metallia  I beg you to turn me into statue … please"

Metallia grinned and pointed her shoes with her metallic finger.
Metallia: "What did you say? Beg in due form"
Jessica leaned and kissed Metallia's shoes.
Jessica : "Metallia, I beg you to … to turn me into a statue for ever. Please"
Jessica kissed again Metallia's shoes. The evil sorceress grinned.
Metallia : "stand up and kiss me … embrace your destiny"
Jessica stood and kisses Metallia. Jessica recovered her mind too late. Few minutes later, Jessica was turned into a red copper statue with golden hairs for eternity.
Jessica's mind fought but finally accepted to become a statue. "nooo … I'm a goddess … she … I can't become … I can't … I'm a statue … no … yes … admired and a shiny metallic statue for ever … yes … I'm a statue."
She laughed loud : "YES, I avenged you my love and now I will cure this world from these empowered bimbos!"

Anya has dried her body with her outfit and used her white lightenings to heal her wound. Jessica appeared before Anya. The blond heroine didn't finish to heal her body. The demoness looked at the bruised heroine.

Jessica : "my little sugar, you seem not to be on form."

Anya raised her fists and covered her body with electricity. Jessica drew her whip and wrapped it around Anya neck. Anya tried to dodge in vain. Jessica engulfed the poor heroine with Red Lightening. Anya agonized and screamed in pain. She fell on her knees.

Jessica tied up the tiny perfect Anya's body with her stretched fingers. Jessica drained Anya's powers and strength until her demonic's body was covered by electricity.  Anya tried to resist but she was too weak and exhausted.

Jessica caressed Anya's chick and used her Control Palm power to alter Anya's mind. Again, the heroine's mind was too weak and exhausted to resist.

Anya : "I realize something … I want to be your eternal slave goddess Jessica. I swear my eternal loyalty and devotion."
Jessica : "It's fun … it's too easy … there's something wrong"
Jessica hesitated but she grinned.
Jessica : "really … kiss my feet!"
Anya slowly leaned : "yes my goddess" She kissed the demoness feet.
Jessica: "stand and come closer then let me drain your soul …"
Anya stood up and pressed her naked body on Jessica's body.
Jessica continued to drain her will, mind then soul. Anya lost consciousness.

Anya woke up. Azria drained more energy from her with a red stretched finger around Anya's chest. Azria overwhelmed the bruised heroine with pleasure to make Anya associating drain process with pleasure. Anya moaned as Azria drained her.

Azria : "look your hand you begin to fade … good girl … there is no hope for you"
Anya saw that her hand began to be transparent. Azria crushed Anya's chest and laughed. 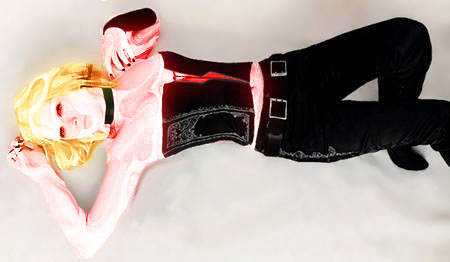