Years ago, Belgium's policemen found a young girl. They reported a traumatized girl hit by lightnings. She  spent few times in hospital to recover until she almost killed an aggressor with electricity. Authorities tried to capture her, but she disappeared. She appeared 1 year later in Japan.

She learned Aikido and Karate. She worked hard to control her power. She fell in love with
Mariko, her martial partner. They started their heroine career, until Mariko died during a fight against an unknown enemy. Few days later, Anya is captured by the evil Doctor Itacha Kurozan who created Reiko23. She killed the doctor.

She moved to USA where she learned bio electronics. During her study, she was captured by an evil scientist of her school. He tried to clone her and her power, when she freed herself one of her clone became Jessica.

She stopped her study and started again an heroine career. She also became the icon of a surfware company (FastSilver). She was naturalized American after she saved a governor from an assassin.


She talks French and English. She is smart, stubborn, nice, confident and sometime naïve. She has an impressive willpower. When she fights she can become very aggressive. She is a rich and single young woman. Her super model job is lucrative. She has been defeated many times, enslaved, tortured but she continues to fight evil doers.

She is an athletic young woman. She is a skilled martial artist (Karate 2th dan and Aikido 5th dan) with an impressive dexterity and agility. As an Aikido expert, she can counter and harm more powerful foe. She uses some weapons as Katana (Japanese sword), ‘Boken’ (wooden katana) or Jo (a 1m30 ~ 50inches wooden stick). Despite of her water weakness, she likes to surf.

But her skin tight outfit has a lot of weaknesses:
Her armoured suit slows her but gives her more protection.

Superpower:
She generates and commands (controls, manipulates, …) electricity. It’s nearly impossible to control electricity better than her. Don’t try to drain with pods or another things electricity around her, electricity obeys her will. Her electricity generation capacity is estimated to be equivalent to 10 nuclear power plants. She is able to blast a city with her power.
Her superpowers' origins are totally unknown but : 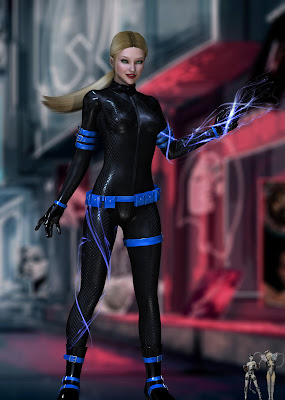 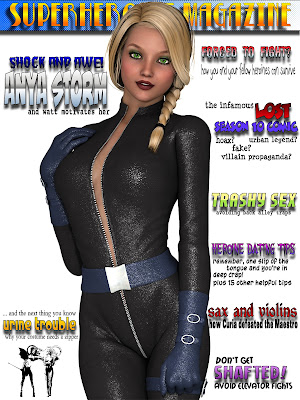 Alternate outfit: armored outfit :
(by me with XNA) 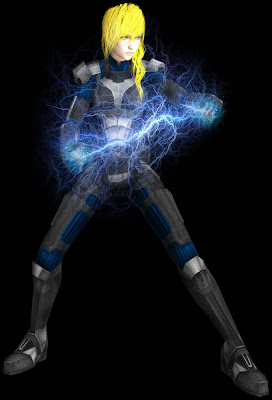 Role-playing:
There’s many secrets to discover about Anya during role-play.
Consider this profile like a web site written by someone who knows her or has fought her.
Don’t hesitate to write comments or to contact me (YIM or Irc).
Anya likes and hates are the characters likes and hates.