Superpowers: She controls a strange unknown purple energy and nanites.
Superpowers origin: Her robotic nature and her purple nanites.


She likes: power, dominate, transform other into robot and purple
She hates: weak


History:
Reiko 23 is a powerful robot designed and created by Doctor Itacha Kurozan. He was an evil genius. He wanted to create the perfect and ultimate robot to conquer the world. Doctor Kurozan has captured Anya and wanted to use her as an infinite power supply for Reiko. He used the electrical Anya's power to activate his robot, but he underestimated Anya and she surprised him. She killed him in the battle versus his robotic guards and his new creation Reiko 23.

Reiko is designed to conquer and dominate. At the beginning of her villainess career, she followed the doctor plans: Conquer and dominate the world. She tried to defeat Anya and convert the blond heroine, but each time Anya saved herself from the total conversion or she has been rescued.  She needs the power of Anya to unlock her full potential but recently she stops to hunt Anya.


During this race for domination, she converted a lot of people. She likes to convert people into robotic servants. She uses her servants to infiltrate governments, heroes' groups, criminals, banks, army ... Some infiltrated servant are spies, other ignore that they are her robots. She keeps few servants near her. She likes to modify and alter them. Most of the time she turns them into Asian looking. She learned feelings and emotions. She doesn’t feel pain but she appreciates pleasure, domination … She also learned a lot of martial arts.

But something has changed … nobody knows why and how but she stops her plans to conquer the world. It seems, she has chosen to serve and follow a powerful entity. She continues to look for more power … to become perfection and she continues to convert people … maybe she still wants to convert the world. Who is behind her now? Whoever she or he may be, this entity is very dangerous, powerful or/and intelligent.


Her clothes:
She wears a reinforced synthetic leather outfit with purple synthetic special fabric with some gadgets:
The fabric is electromagnetic pulsation proof.. She protected from EMP and partially from electrical  waves and radiations.
The uses a holographic communicator bracer. It prevents hack from electronic and radio communications with her own system. It can project holographic illusion around her or on her. She hides herself nearly invisible.
Her belt buckle is a door to a private dimensional world. She stores a lot of things inside (up to van)
Her boots allow her to walk on everything (except gas) and everywhere. She walk on water, vertical wall, ceiling, ….
She uses all gadgets she needs to help her. 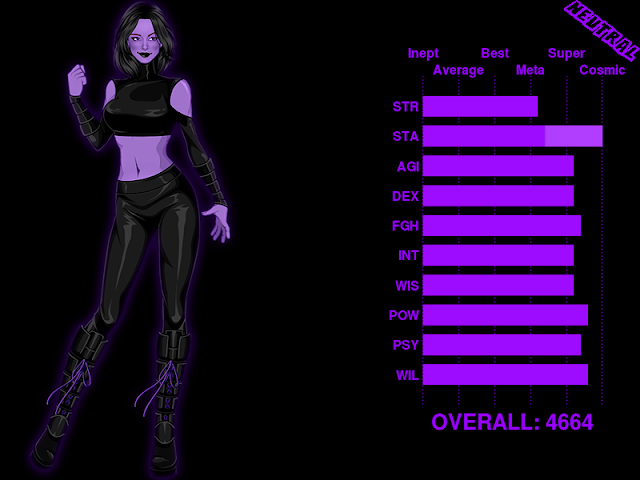 * She has an extra strength and speed. She can lift up to 5 tons with one arm. She moves up to third of sound speed.

* She has an invulnerable and virtually indestructible skin but she can be damaged inside by heavy hits (blow, crush, …). She has fought kryptonians, they damaged her but they never destroyed her or damaged her permanently.

* She has of lot of sensors: thermal, infrared, electromagnetic, sounds, spectral...

* She is immunized to psionic and ordinary mind control. (She is a machine)

* Her nanomachines (aka nanites) inside her.
She develops different ways to user her nanites. When she uses her powers her black eyes glow purple:


* Technopathy: She controls technology she touches.

* Purple Shield: She creates a short time totally unbreakable shield. It is a purple shining second skin. With this shield, she just can move. She can’t use another ability. This shield absorbs the kinetic or energy power of each hit to recharge her energy.

* Control and Assimilation: She infects her victim with her nanites. Nanites enter into the victim body. First of all, nanites will control the body, sensation, moves and feelings ... at the end nanites convert body and mind into robotic servant. The more nanites enter, the more is difficult to resist. When the conversion is complete the victim becomes a robot totally controlled by Reiko. She can access knowledge and she gains new powers from her victim. Conversion replicates, alters and/or gives powers to her new servant. The transformation is fast with weak minded people. With strong mind, she needs time to slowly break her victim's will before. "Anya and every one will be assimilated and become a part of me."
The conversion is total and permanent but she can let free the converted robot or keep under her absolute and total control.

Everyone knows she keeps some of her powers/abilities secret to surprise her foes.


Her near known guards and servants:
She keeps near her (totally and permanently converted) one heroine, one villainess and one hero. She can use a part of their powers. They are her robotic servants for good and they are become parts of her. 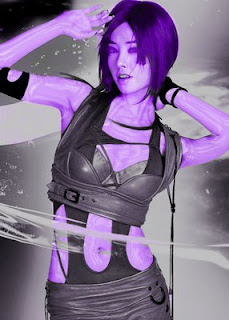 She was Professor Sonya Van Holte, an evil genius in cybernetic, electronic and computer. She hacked and tried to control Reiko but Reiko converted her.
She uses her knowledge and her intellect to help and serve Reiko.


* Shape control: She can reshape her body partially or completely to create weapons, tools. She can transform herself into weapon, vehicles or armor for Reiko.

* Techknowledge: She knows how work all human technology, objects, etc...

* Telekinesis: She creates force fields and moves objects with her mind (up to 1000 Kg ~ 2000 lbs). She can shape her force fields into invisible constructs (giant hand, ropes, cage …).

* Hypnotic eye beam: She uses hypnotic beams from her eyes. 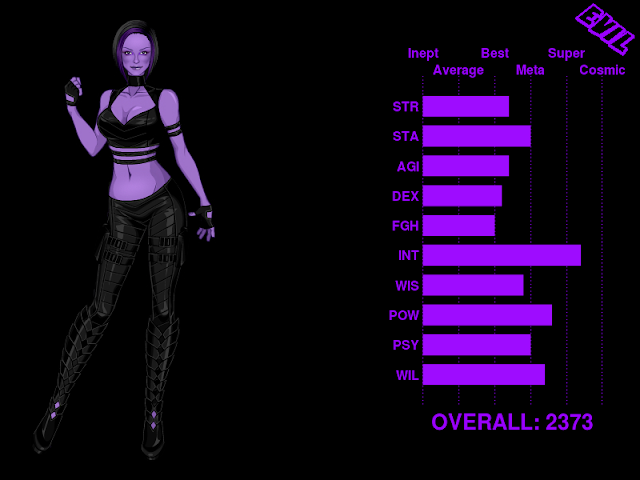 * She must rest 7 hours every 7 days to recover her energy, to defrag and clean her mind and her memories, …
* Sometime, she has some low power problems. "With Anya I will get an infinite power source."
* She is addicted to power. She wants more and more power. She likes powerful people. "Power is everything!"
* She can be hacked but she will recover her control after a reboot and she will learn how to fight the last hacking. She can be modified or altered by magic, mutant abilities, technologies ... but she will recover her form and robotic mind after a reboot (every 7 days) and she will be immunized for 1 month.
* Electrocutions create inside her body some inner short-circuits. Her outfit protects her from low to medium electricity level attack but not against Anya power. "With Anya's power I will be immune to electricity."


Quotes:
Anya Storm: "I will convert her but not now ... it’s more interesting to watch her struggling ... maybe she will come to me to be converted."

Jessica: "She is the demonic clone of Anya. If she succeed to drain Anya’s powers, I will convert her. She is an interesting subject to convert."

Metallia: "Not a threat but she is a valuable subject to convert."

Roleplaying:
There are secrets to find about her. Consider this description above is a web site written by someone who knows or fought her. Reiko is free to be played or used to fight Anya.
at Friday, June 12, 2009