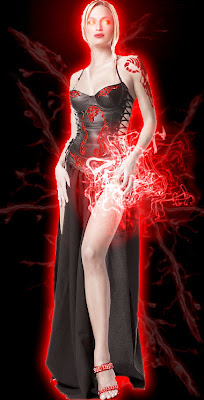 Sexual Orientation: Bi
Race or Ethnicity: White
Religion: She believes in her
Family: Unknown
Profession: She is a conqueror, slaver and dominator.

Superpowers: Demonic energy manipulation and generation
Superpowers origin: her nature and she can drain powers

She likes: destroying, controlling and draining every empowered being.
She hates: Reiko23, Metallia and kittens

Description:
She is a sexy, beautiful and terrifying demoness created by an evil scientist with the Anya’s DNA.
Anya has been captured by an evil scientist. After 1 month of torturing experiments, he succeeded in creating a clone of Anya, but his creation was not stable. Too much puzzled by his creation, he made a mistake. Anya who waited for the right moment, freed herself. During the fight he died and his lab was destroyed. Jessica was trapped under the ruins. She was dying, she heard a voice and she made a pact with a demon to survive. They merged and mutated. Her body changed.
She looks older than Anya. She has long platinum hair and red eyes. She has a slender and perfect body dressed with leather clothes.
She likes to control and dominate. She wants to become more powerful. She thinks she is a goddess. "I’m a goddess and I will rule this world ". To complete herself, she needs to absorb Anya’s powers and soul. "I will destroy this bitch's will power and she will be my pet, my toy. I will drain her soul and she will complete mine."
She is crazy, cruel and violent. She enjoys to play with her victims. Fearing and torturing her victims feeds and strengthens her soul. "Your sufferings are so tasty .. scream for me slug." She has no honor and no mercy. She hates all heroines because they remind her of Anya.
If you call her to attack Anya she will come, but take care of your back. She is less smart than Anya but she is not naive. "I know this bitch will become mine. It is her destiny to give me the power to become a goddess."

Recently, she fought Anya and two friends. She has been nearly destroyed by a devastating electric attack. Anya’s friend, the sorceress, used a spell to seal Jessica in another dimension. 4 months later, Jessica is back, powerful than before and she is not alone.

Her dress :
Polymorph : she can transform her dress in any leather clothes
Auto repair : her dress regenerates 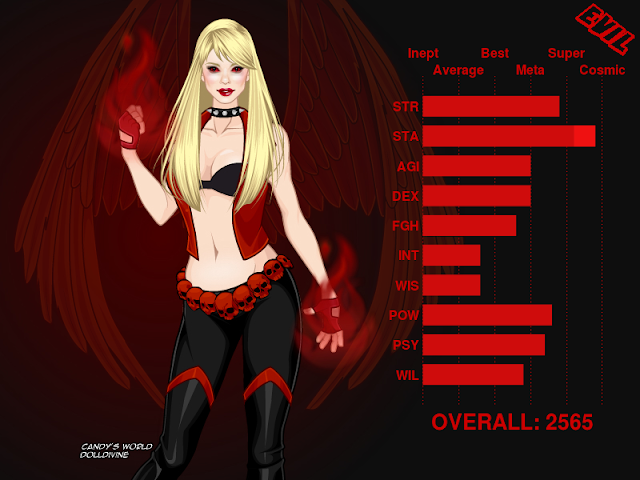 Superpower:
She is a demoness and she uses a red demonic energy.

Her body:
Extra strength: She can lift up to 15 tons without effort. If she focuses her demonic energy, her red eyes glow and she can light 60 tons during a short period of time. "crushing your body, slowly ... what a pleasant thing"
Extra Speed: She moves up to third of sound's speed. "This bitch is faster than me ... but I don't know what is tiredness."
Extra Toughness and vigor: She has a powerful constitution and she is physically very resistant and tough. A RPG will eject her and deals pain but won’t hurt her. She resists very well poison, most of drugs, … "You hit like a kitten, weak thing!."
Regeneration: She can regenerate and revive. She needs 15 minutes to regenerate completely a leg. "You want to kill me. hahaha I terrify the death itself."
Mental resist: She is very resistant to telepathic probes from even powerful mind readers or manipulators. "I'm too powerful for you ... let me show you how to manipulate mind."
Magic resist: Due her demonic being, magic spells loose half of their effect.
Immunity: She doesn’t age. She doesn’t need to breath or sleep. She is totally immunized against all disease.
Demonic perfume: Her emits a aphrodisiac smell. Simple mortals lose their will beside her, the others have to fight their feelings when they are near her.

Red demonic energy:
· Red Drain Flame: She imbues her skin (most of the time her hands) with red flames. When she touches someone, she drains and absorbs memories, abilities, strength and powers. Her victim feels nothing, pleasure or pain. The more she touches her victim, the more the victim feels the effect. She can also suck the life out of her victims and rejuvenates herself faster. She thinks she can absorb Anya's power for good. "Anya's power must be mine. I will squeeze up against her and I know this bitch will like it"
· Red Eyes: Tiny red lightenings glow in her eyes then she can destroys electronic devices at sight. "Reiko … you want get some, come get some!"
· Red Demonic Control Palm: She imbues her hands with tiny red lightenings and if she touches your head, she can modify your synapse patterns. She slowly takes control of your mind, senses and soul. "I will enjoy grabbing Anya’s blond haired head between my hands and turning this bitch into a doll for ever."
· Red Flux Slide: Her body becomes red lightenings and she slides using metal, cables. She can travel with this ability with the speed of electricity. "No one is safe, all of your houses have electric outlet or phone, so many doors just for me!"
· Red Nightmare Fingers: She stretches her fingers. They grow and become red energy tentacles. She can control 10 tentacles up to 5 meters (16ft) or 5 tentacles up to 10 meters (32ft). She uses this power to whip or catch her victims. She can use any of her power trough her tentacles. "Anything itching you. Can I help you?"
· Red Wings: She creates red spectral wings on her back. She can fly up to half of sound speed. These wings cut like swords and she can protect herself behind. She needs 5 minutes to recreate wings if they are destroyed. "Look above … I’m your doom angel."
· Red Demonic Whip: She has stolen this weapon in hell. A powerful aphrodisiac poison covers it. She can imbue her whip with her Red Drain power or with her Red Demonic Control Palm powers. It is a very resistant whip. "It is a perfect leash for you Anya, my sweet bitch!"
· Red Lightning Shock: She throws red lightening bolts. They are very painful but deal little damages. "Wriggle and scream for me!"
· Red Demonic Conjuration: She can create simple things with her red energy: ropes, chair, wall, sword, … She can use any of her power trough her creation. She can’t create complex things like machine or electronics. “A gift for you, Red Demonic Panties … hahahahaha”

Other special powers:
· Decoys: Every hour she can create 3 clones of her. These clones move like her, smell like her, look like her, talk like her but they don’t have any power.
· Silence of  Doom: She makes the area around her completely silent.
· Mistress of Hell: She can control any of minor demon around her.

Notes:
· Water doesn’t neutralize her powers. "Are you kidding me? How water can weaken a Goddess!??."
· She has not an infinite reserve of energy but she regenerates slowly her inner energy. "I don’t know why she has such power and not me but this bitch will empower my soul for ever."

Know weaknesses:
· She can not endure cat's meow that gives migraines. That doesn’t work with record or imitation.
· Sometimes she has very painful migraine crisis. She suffers severe pain she had to take opiates to control it. She doesn’t like pain.
· She is addicted to power and domination and some drugs (opiates).
· Electrocution gives her a lot of pain and migraine. She thinks if she absorbs Anya's powers she will be immunized to electricity like Anya is and migraines will stop.
· Due her powerful body, she is not a trained skilled martial artist like Anya.

Role-playing:
There’s many secrets to discover about Anya during role-play.
Consider this profile like a web site written by someone who knows her or has fought her.
Don’t hesitate to write comments or to contact me (YIM or Irc).
Anya likes and hates are the characters likes and hates.