Metallia in Anya's body continues her crusade against heroine and villainess.
Anya trapped in Azria's world is totally helpless to stop the wraith's plan.
A group of empowered young women tries to stop the wraith but she seems unstoppable.


The Azria's Evil Plan Chapter 7: Hope fades
Azria smiled as she watched this meeting. She grabbed Anya by her nap and lifted the destroyed heroine like a rag doll.
Azria : “look slut … they try to plot against me … but they don’t know I have the power of divination from Miss Oracle … they are your last chance and I’ll go to stop them … watch the show my little slut.”
--- 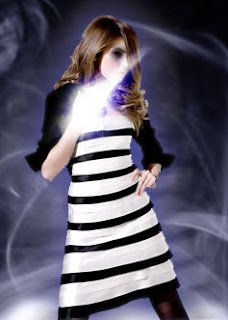 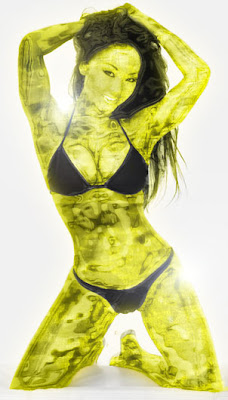 Metallia: “I understood everything. I know what she is about to do … I know she will become an absolute over powerful goddess. She will finish to clean this world from powered bimbos. For that I can give her my soul and everything she wants … I tried to give her the most powerful women on earth … and now I’ll turn you into a statue. You’ll be sent into her world or dimension or lair … I don’t care. She’ll use you to weaken Anya, I think and she’ll eat your soul. And now you’ll let me turn you into a statue … because you can’t resist me!”
Crimson Kat was enthralled by Metallia’s powers and words. She stood before the sorceress motionless and let Metallia kissing her gorgeous lips.
Metallia: “on your knees and pose for me … your last pose!”
Crimson Kat knelt and posed. Kimberly’s body was slowly turned into gold. She became a statue and she liked that, her perfect body for eternity admired. Her mind was happy before fell into nothing.
---
Azria laughed as she heard Metallia.
Azria: “Do you listen her my little slut? … she convert the next to last.”
Anya slowly lost hope.
Anya: “impossible … how … why?”
Azria : “hatred my little slut… and my perfect plan!”
Crimson Kat appeared. Anya laid motionless on her back. She didn’t want to fight. She looked Crimson Kat walking toward her. Kimberly sat on Anya’s flat belly. Crimson Kat tied Anya’s arms with wire from her utility belt. Anya didn’t even try to struggle.
Crimson Kat: “you don’t try to save your life … why?”
Anya: “I can’t fight you … do everything you want with me!”
Crimson Kat looked the defenseless Anya’s perfect body and smiled. She untied Anya’s hands.
Crimson Kat : “then unzip this costume and undress! I’ll give you a pleasurable death”
Crimson Kat stood as Anya unzipped her costume and slowly removed it. Anya was totally overwhelmed by Kimberly’s hypnotic beauty. Anya’s gaze is captured by this exotic girl. Desire stared in her very soul remnant. Crimson laid on Anya’s naked tiny perfect body. Anya moaned.
Hour after hour, they made love. Anya did everything to please Kimberly. Orgasm after orgasm Anya’s body became weaker and weaker but Crimson Kat had an improved stamina. She didn’t feel any tiredness. Anya was totally extinguished but she tried to please Kimberly. They continued until Anya’s hearth stopped to beat in a last fatal orgasm.
Anya woke up in Azria’s arms. The evil wraith stroked her blond hair and drained the last remnant of her soul. Anya moaned. Azria was so attractive so desirable. She leaned her blond haired head on Azria’s chest.
Azria: “you gave up … slut. … one more soul. Look at you.”
Azria invoked a mirror. Anya saw herself dressed with her combat outfit in Azria’s arms. She saw herself totally helpless.
Azria :”you like to wear this outfit. You like your body coated with this skin tight fabric … so fine.”
Azria rubbed Anya’s crotch. The blond heroine was overwhelmed by pleasure.
Azria : “so resistant”
Azria controlled the fabric to tighten and crush Anya’s body with her outfit. Anya arched her back and screamed in pain. Anya was unable to breath as her chest was compressed.
Azria laughed and kissed Anya’soft lips. Suddenly she stopped and turned Anya’s head. They looked Lady Ashton in front the golden UltraWoman statue.
Azria: “The last member of their plot … Metallia rides to her … your friend Lady Ashton will be your final torment … your executioner”
Azria laughed as tears flew from Anya’s green eyes.
Azria : “I hear your thoughts, if you give up and make me a goddess … you give her a chance to save her soul.”
Anya: “I can’t trust you”
Azria: “maybe you’re right … whatever I don’t care. I want to see your friend … finishing you. This will be a precious moment … even if you want to give up, it’s too late. My little slut, you can trust me, after months of torments, your last moment is incoming in few minutes …”
Azria laughed and overwhelmed Anya’s body with a rush of pleasure. Anya arched her back and tensed her muscles as she moaned.
---
This chapter involved:
- Lady Ashton
- Crimson Kat
- Reiko23
- a strange girl ...