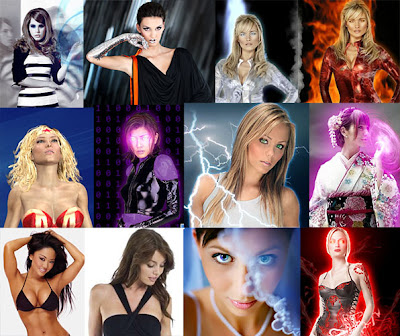 Anya:
She was tortured and traumatized during months.Saved from Azria, she fell in Valerie's hands who enslaved the young heroine. A clue led her friends to a jail where Anya was imprisoned.
Now, Anya is psychologically fragile and lost a part of her confident … but she fights each day to recover. She knows that she has more power in her that she thought. She doesn't understand what or who she is … Enough power to tear the spatio-temporal net? A lot of questions about her without answer.

Steam Twins:
They are no more. Souls and powers have been consumed for ever. Azria has the power to control ice and Metallia to control fire. Why did Megami decide to give these power and not to save the Twins?

Special Guests:
Ultrawoman, Valerie, Lady Ashton and Crimson Kat saved the world. They remember everything if they want. If they don't they shall forget everything details, and their adventure will be a latent dream. (These characters are original characters and I hope that their 'owner' liked this adventure).

Other Heroines and Villainness:
It seems they all forget everything about this adventure.

Metallia:
She understood that she was manipulated by Azria but she followed Azria's plan. She was not surprised to see Megami behind Azria's failure. She knows more than she leads us to believe.
She gained the file control power of Firia and a lot of knowledge about heroines and villainness.

Jessica:
She was an essential part of Megami's plan to stop Azria. Her angry and pride were essential. Jessica disappeared after the last battle. She is coming back months later (story incoming).

Azria:
She was near to success but she had been stopped. She lost all of her powers gained by her ritual except the power to control ice from Frizia. She tasted an ultimate power but she failed … now she wants again to get these feelings.

Megami Bara:
Mysterious, manipulative, smart, angelic, dangerous, enigmatic, powerful, beautiful, graceful, … Megami Bara is a mystery.
She used a anonymous and mysterious girl appearance to gather powerful heroines and villainness to stop Azria. She made a plan to stop Azria and save the wraith's victims but not all. Her plan pushed Anya's powers above the heroine known limits. Anya destroyed a spatio-temporal net. She let Anya in the cruel Valerie's hands and she gave Steam Twins souls and powers to Azria and Metallia. What has she in mind? What is she? Who is she?

I tried to make a montage to illustrate all characters (hope I didn't forget someone ...)
at Wednesday, May 04, 2011