Religion:
She believes in Jessica

Profession:
She is the first Jessica priestess.

She likes:
to serve Jessica.


Description:
Nina is a sorceress. She was an heroine. She has been captured, tormented and tortured by Jessica during years. She was totally broken and she fell in love with Jessica.

When Jessica disappeared after Azria defeat, she was released from her captivity. Lost and forgotten, she searched for her Goddess. She used dark ritual and magic to find her Goddess … she freed Jessica and bring back the demoness.

Nina is totally devoted and loyal to Jessica. The ritual to free Jessica altered her body and powers. She became a semi vampire using a dark blood magic. She is not a good fighter.

She a blood magic sorceress. The powers she used altered her being. She uses her own blood or blood from various being (human, animal, …) to cast powerful spells and to summon golems or various creatures. She is an undead totally immune to poison and disease. She 5th
stronger than a normal girl, twice faster than and she is immortal (not invincible). She also regenerates by using her blood.


Most known spells and abilities:

Vampire’s bite: She bites to suck blood, life and strengh. Her victim is overwhelmed by pain or pleasure. She needs blood to refill her blood powers.

Theft of Blood: She opens her hand going to her target, a red flux appears from and she can mystically drain blood (and life) of her victim. She can drain blood from human, mutants, angels and demons.

Coat of blood: She covers her body with blood and she becomes invisible.

Blood form: Her body becomes totally a mass of blood. She may convert her body parts to blood, which may later be used to reform the body part in question. The body part may also be regenerated.

Clone of blood: She creates a humanoid of blood. The humanoid has her strength and speed.

Beverage of submission: She transforms her blood into a powerful and addictive drug.

Blood of Agony: She coats a weapon or her body with adequate size of her blood. She deals an unbelievable magic pain to her victim. She also infects her victim with her blood.

Reform Body: She reforms, even after she is destroyed from anyone who drunk or infected by her blood.

Blood knowledge: She can read in her blood victim: powers, nature, knowledge … She can discover secrets. “Blood is essence of being”

Blood source of all things: She can convert her blood into another energy and emits this energy: fire, ice, electricity, laser, psionic, …

Blood wings: She creates red wings. She can fly like Jessica.

Blood rituals: She can perform dark magic or blood magic rituals. “With time and blood nothing is impossible for my Goddess.” 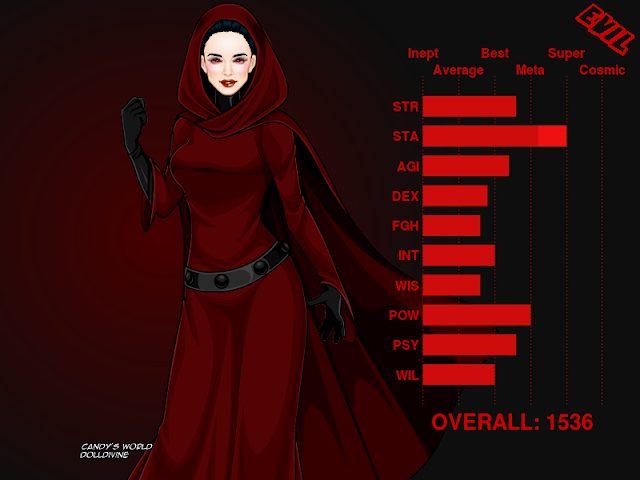 Know weaknesses:
She lost all of her blood magic powers if sun touch her skin (but she keeps her undead extra strength, speed and regeneration).
She needs blood to refill her blood powers. She is always hungry. The less she has blood the weaker she is.


Role-playing:
There’s many secrets to discover.
Consider this profile like a web site written by someone who knows her or has fought her.