Replace the end of Mistress of Puppets Chapter by ...

Megami: "Stay here ... and watch. Reiko will protect us"

Azria squeezed Anya's crotch with her foot covered by a white aura. Anya moaned in pleasure. Azria stuck Anya's feet and hands with summoned wood stakes. Anya didn't feel the stakes. She was totally overwhelmed by pleasure. She bit her lips and closed her eyes as she reached orgasm. Her body was not able to support more. She was about to die.

Azria fired another blast of energy. Reiko's shield was destroyed.

Anya moaned louder and arched her back in pleasure as Azria laid on her. The evil wraith rubbed the heroine's crotch with her tight and caressed the blond heroine's curves. She summoned demons and fired a huge energy ball. This ball entered in Reiko's body. The robot quivered as her body smoked.

Ultrawoman, Jessica, Crimson Kat and Lady Ashton ran to stop Azria but they were stopped by a force shield around Azria. Demons attacked them.

Azria slowly faded into Anya's body. The heroine's body felt so good and was totally under pleasure control. Lust was all that she required. Her mind and soul cracked and were totally annihilated in a last orgasm. Azria took possession of her new body. It was the birth of a new omnipotent entity. A goddess rose. She stood. Anya's face smirked. Her green eyes glowed black. She spread her arms and ethereal flux came into her new body from Heroines and Villainness. She absorbed their soul and laughed, in this dimension they were not able to resist.

Azria looked Metallia and snapped her finger. The evil sorceress was fully healed. She pointed Megami.

Azria : "You will stay in this world for ever. You will fall and become these demons toy for ever …"

Azria and Metallia faded and let Megami and Reiko in an infinite jail. 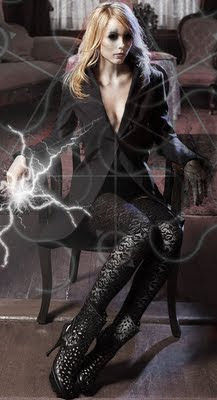 Azria had infinite powers with infinite energy. She hugged and kissed Metallia to give the dark sorceress enough power to defeat any empowered women and girls.

Azria: "defeat and neutralize any one you want my dear."

Metallia's head leaned on Azria's shoulders and she smiled.

The last hero knelt before her.

" … I swear my eternal allegiance and devotion. I give you my body, mind and soul. My Goddess."

Azria : "thanks and I take all …" She laughed as she sat and used her dark energy to drain his soul.

A pale blonde evil goddess with an angel face rules the world for ever.
at Thursday, May 19, 2011