She opened sharply her green eyes in shock. She covered her body with lightenings to burn this strange liquid. She fell on her knees as she felt an impressive pressure on her face. She saw more liquid entering in her outfit. She was not able to breath. She used her inner lightening boost power but the liquid between her outfit and her skin burnt her. A hand appeared then an arm. Someone very strong was invisible. She needed to breath. She saw in front her a slender red head young woman wearing a red robe with a hood.

More and more liquid flew from her opponent hand. The red head woman smiled as she saw Anya being asphyxiated. The liquid under the heroine outfit entered in Anya crotch. The heroine wanted to scream in pain but she was not able. She convulsed and squirmed in pain on the floor but she fired a lightening chain.

The red head woman screamed, flight and hit a wall. The red liquid tried to enter in Anya mouth. Suddenly Anya screamed as the liquid penetrated in her tiny body between her legs then the liquid entered in her mouth.

The liquid was hot and sweet. Her body and mind were dazed. She felt so good. She fought this feeling and slowly stood up. She screamed and put her hands on her crotch as she felt on her knees. A rope of red liquid appeared then wrapped and tightened hard her tiny body. She didn't see her opponent. She fired lightening bolt all around her.

She saw a water tentacle entering in her outfit. Water filled her outfit and she lost her powers. Bound by this red liquid and powerless, she was not able to fight back. She was not able to prevent the red head woman to slowly remove her outfit from behind as the red rope slow tightened more and crush the heroine perfect body.

Nina: "Hello Miss Storm, I understand my Goddess … you look so tasty."

Anya : "What are you doing and who are …. YOOUUHHHHAAAA"

The red head woman created a red knife and stuck it in her back. The blond heroine screamed in pain.

Nina: "I talk you …answer. I'm Jessica's servant, Nina. Where is Jessica?"

Nina moved in front Anya and smiled. "Where is Jessica? Where is my Goddess?"

Nina smiled and leaned her head on Anya's shoulders. Suddenly Nina bite Anya's neck and sucked her blood like a vampire. Anya was overwhelmed by pleasure. She wriggled and struggled her tied body in vain and lost consciousness.

She woke up tied and wet in a dark cave. She felt so weak. Nina rubbed her perfect curves and smiled.

Nina: "You're are really beautiful and … you're so tasty. I like your blood but … you're my Goddess properties. I read in your blood what happened. … Call me Bloody Nina, the first Jessica's Priestess."

Nina: "Shhhhh … I know how to bring back my goddess here and I will offer you as a present … A present to prove my devotion."

Nina smiled and put her hand on Anya's chest.

Blood cover her hand and she extracted Anya's heart from her chest. Anya screamed as she saw her heart in Nina's hand.

In the other hand Nina created a bloodstone and put it in Anya's chest.

Nina: "When I read your blood I created an empathic link … I also read your thoughts and memories. … I know you're dangerous … I can't kill you but I can neutralize you …"

She put the heroine's heart in a box. A blood golem took it and walked out the cave.

Nina: "My servant will hide somewhere your heart. Your body is under my control. No one will come for you. I let in your house a copy of you … you're doomed! But …"

Nina focused and partitions appeared around the stone table then created a stone bath. Water and blood filled the bath.

Nina used her blood to create a strange red creature.

Nina: "I called this creature the Spirit Annihilator. I put the creature on your crotch"

Nina: "Do you feel it? Something grows in your body … and you like this feeling. And it will cover your tiny body. It secretes a power drug that permeates your skin then your body."

The creature began to rape Anya. The blond heroine was totally overwhelmed by pleasure. 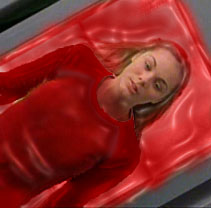 "Most of the time, my creature kills my victim … cardiac arrest but with your new blood stone heart … you have to endure it. Orgasm after orgasm this creature will destroy your mind and your brain … Farewell!"

Anya slowly wriggled and moaned in pleasure totally helpless and powerless. Nina smirked looking the heroine trapped in a bath of water, without heart and with this bloody outfit destroying her mind and brain. Nina walked in another room and let the doomed heroine to her destruction.

Nina sat in the middle of the pentagram and closed her red eyes. Blood flew from her arms and moved on the wall in front her. After the minutes her blood drew a red door. She took a blond hair and put down it in front the red door. The hair flew. She smiled and knelt. The door opened and Jessica's pale hand began to exit from a dark place.

A lightening chain stroked her and made her fly and hit hard a wall. Before she was able to stand. Anya exploded a blood golem and moved fast. The blond heroine lightening punched the red sorceress.

Nina fell face on the floor.

Anya fired a continuous lightening chain to burn the red sorceress. Nina screamed in pain as her robe and body burnt.

Anya: "I know you're not alive … I don't feel in you electricity …"

Anya reduced the blood sorceress to a burnt and motionless corpse. The blond heroine fired another chain lightening into the door when she saw Jessica's shadow.

She sat in the middle of the pentagram and focused. She song a spell. After few minutes nothing happened. She opened her green eyes and cried.

She stood up and dried her tears. She looked around angry. Lightening crackled around her in the room. More and more lightenings appeared around her and began to destroy everything around her. She blasted the wall where the blood door was. She destroyed totally the caves as she ran out. She was in dark woods on mountainside. She looked away as the cave collapsed behind her.

Days later, stones rolled. The sound echoed in a dark wood. A dark hand appeared. Jessica exited from under stones. She had someone in her arms covered by a kind of blanket.

Nina : "My Goddess … I failed … forgive me. How did she free herself? She was defeated … doomed"
Jessica: "You underestimated this bitch. The most important, my slave … you freed me. A simple hair was enough to regenerate. I let her destroying me … my soul jumped in my hair and now I'm back. You bring my soul back in this world then I allow you to serve me for ever as my priestess."

Nina: "Thank you my goddess. I had a good plan but she had her too …"

Jessica: "We have to discover how she did that and I want to know what and who is this pinky Japanese girl!"

Jessica used her red wings and flew away. The powerful demoness, Jessica is back and Nina, a blood sorceress and vampire, serves her.