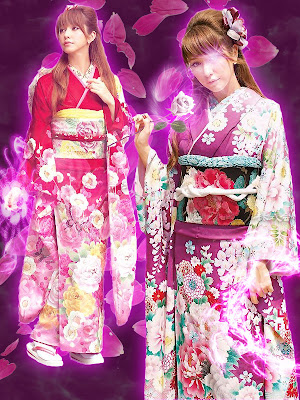 She Likes: flowers especially roses, plotting, looking other fighting for her
She Hates: fighting

Description :
Megami Bara means the Goddess of Roses. In her real (supposed) form, she is a very cute and attractive petite Japanese girl. She wears Japanese kimonos. Around her there is a sweet, nice and entrancing smell of fresh roses. Her cute face is always lit up by a smile. She moves with an entrancing grace. She is grace itself.

Few years ago, she was a magician. She learned martial art in the same dojo as Anya in Japan. She totally disappeared when Anya leaved Japan after the blond heroine has defeated Reiko23 creator. It seems Anya and she was very close. Anya recognized her as Mariko.

“Mariko is … was a beautiful and smart sorceress. She learned Aikido with me. We spent sweet and good times together and we were close. I remember that she had a gift. She was an incredible tactician … unbeatable chess player. She was always ahead of schedule … premonition, genius, advance tactical gifts, … honestly I don’t know.”

She appeared recently out of Japan. She gathered a team of heroine and villainness to stop Azria with a very strange plan. She knew everything since the beginning, she was able to stop Azria when the evil wraith started her plan. She saved Anya and most of heroines and villainness but she gave Steam sisters’ souls to Azria and Metallia and she let Anya in the domineering Valerie’s arms.

Reiko estimates that her innocent and angelic beauty hides a very dangerous, elusive and powerful entity. Her plans, goals and motivations are totally unknown. It seems she likes to play with other in dangerous and cruel games. She works out complex strategies and likes to win by hair’s breadth.

Reiko found some data about her especially about heroines who fought her in Japan.:
- She needs to absorb life energy
- She is not alive
- Her body is not very resistant but not destructible. You can hurt her badly she falls and she rises again.
- Her strength and speed are normal.
- She is an Aikido expert but she avoids fight.

Outfit :
She wears most of the time a sweet Japanese kimono decorated by flowers. Her Kimono is like a part of her.

Superpower:
Her nature is unknown. Illusion or her nature, it seems it is very difficult to hurt her.

Roses abilities
•Thorn of defense: A simple defensive technique that utilizes long thorny rose stem.  She will either twirl the stems around herself to create a barrier, or set them on the ground to mimic a circular web roses. In web mode, the web constructs a distance between herself and the opponent, and will simply slash or grab the enemy if they attempt to enter the field. Thorns will drain blood and powers from each wound done.
•Red Rose: Megami uses red roses as a projectile. When struck by the thorns on the roses or smelling their fragrance, the target would be poisoned until they slowly loose their 5 senses, are drained (strength, powers and life) then fell into a sweet aroma of death. The red roses can also create a dense red mist to cover the entire place and hide her position. Each victim feeds her.
•Black Rose: Megami uses black roses as a projectile. Upon impact, they can break anything within their reach. The power of this technique is high enough to reduce to dust a steel door.
•White Rose: Megami uses one or more white roses as a projectile. It strikes at the opponent's chest, and slowly drains all blood from their heart and powers. As the white rose draws blood, it eventually becomes red. This is Megami's strongest attack. A single rose is enough to kill a kryptonian in few hours or strong human is few seconds. Apparently, the rose seeks the heart of the enemy, so is not possible to avoid it. The only way to escape from this attack is to destroy the rose itself or try to shield oneself from it, albeit the rose showed enough penetrating power to break even a Kevlar or steel armor.
•Great Capture: A technique that twists roses to paralyze, capture, or immobilize foes. Megami also uses this technique to like the Bloody Rose.
•Petals form: She turns herself into a cloud of petals of rose. She is intangible. In this cloud, foes breathe her perfume and fall under a sweet trance. In this form, she can teleport herself, petals cloud twists and she disappears. In this form, she is immune to energy attack, elemental, attack and physical attack. It seems, this form tires her.

Illusions and reality alteration:
•The Last Nightmare: She deals the technique with a single finger. A pink and tiny energy ball enters in her opponent's head to literally destroy her opponent's mind. Once used, it sends various nightmare illusions directly created by the opponent's brain; her victim is trapped within an illusion that is almost indistinguishable from reality; her opponent's greatest fears and suffering fulfill, overwhelm and destroy her victim mind and soul.
•The Last Dream: It's the same technique but she uses pleasant dreams to trap mind and soul in time. Her victim falls in a state of permanent and eternal ecstasy.
•Thousand Faces: She is imbued by a pink aura and she assumes another appearance (voice, smell, aura, mind, …). Most of the time she likes to become a totally anonymous person.
•More Than Real: She talks and creates illusions. She uses them to trick or injure a victim. Her victim cannot be killed in this fashion, but her opponent will still be subject to wounds and feels pain.
•Fall Into My world: A pink vortex appears her eye. She creates her own fantasy world, and put her victim into it. She controls physical rules and time.
•Petals Rain: She creates a rose petals rain. Under this rain, her target falls into a sweet and blank state of ecstasy and pleasure. It’s very addictive but it heals and regenerates body and mind of her target.

Psionic:
•What You Want To Hear: She can know exactly what to say to get a desired response from another. This power usually doesn't permanently change a person's viewpoint, but it can.
•Telepathic: She can converse psychically with an entity, project images, transmit sensory input, etc.
•Dead End Recital: She sings. Her voice weakens her opponent to the point that they can’t fight anymore. Her voice resonates within her opponent’s brain and body (even if the opponent can not hear her voice). Her voice causes direct internal physical damage as well, as her voice is able to shatter her opponent’s mind.
•Siren Climax: It is a amplification of ‘Dead End Recital’. Once ‘Dead End Recital’ reaches climax, her voice can kill her opponent by destroying their mind.
•?????: She perceives most of the thing around her. She learns about events and individuals. It seems she may see pieces of the future.
•Voice of the Siren: She entrances a victim with her voice. The victim must hear her voice for this power to work. The victim can only listen in rapture until she stops singing.
•Entrancement: She enchants her victim, who will seek to please her. This effect stops if the victims are aggressed by her.

Pink energy:
This energy is an unknown mix of magic and something else.
•Heat of Goodness: A part of her body radiates a pleasant pink flame. Near the flame, everyone feels a sweet pleasure. If she touches someone, her target's body and mind are overwhelmed by an intense rush of pleasure. She can throw this flame.
•Pink Plant: She creates a living plant in her palm. She throws it and this strong plant engulfs her opponent. If the opponent is paralyzed, she can use any of her Pink Energy power trough her plant.
•Circle of Constriction: She creates circles or disks of pink energy. She throws them. They can explode, cut or tie an opponent. She can hurt anyone but she can’t kill. It seems they could deal only half of her opponent life in damage.
•Potions: She creates and uses potions. It seems she may heal, poison, give strength, … with her potions. She can use her potion as powerful drug too.

Known weaknesses:
•Sound and lights: It seems she is sensible to some sounds and lights.
•Ordinary strength, speed and stamina. (but it seems her body is very hard to destroy)
•She likes to play with her opponent or victim.

Role-playing:
There are few secrets to find about her. Consider this description above is a web site written by someone who knows or fought her. Megami is free to be played or used during rp with Anya (me). She is a mysterious dangerous, and entrancing girl who is able and like to play with other.

Megami Bara ... the Mistress of puppets of Azria's Evil Plan story.
A new and dangerous girl from Anya's past. I wanted to create an graceful, dangerous and elusive girl. (You can recognize the white rose)
at Thursday, March 31, 2011