The Steam Twins have been killed during Azria's Evil Plan story. Sisters' souls have been absorbed by Metallia and Azria.


Then the Steam Twins are no more. Farwell sisters!

They are 2 tall blond and athletic heroine twins. They are 28 years old. They are 1m77 (5ft10) tall and weigh 60 Kg (131 pounds). Their measurements are 91C-64-93 (36C-25-38). They enjoy life and all decent pleasures that the life bring to them. They enjoy life.
Sonya and Diana Andersons were professional women wrestlers. They won the women tag team world champion ship and a lot of underground matches. After an underground match, they disappeared. They have been trapped by an evil scientist. We still don’t know how he did but he enhanced hers dna and gives twins superpowers. 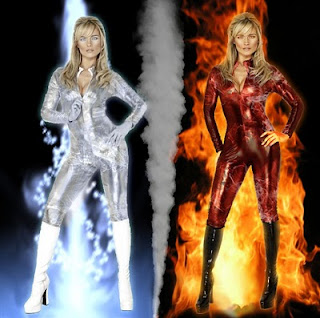 Anya Storm saved her from this unknown scientist. Sonya became Frizia and Diania became Firia.
They wear a skintight catsuit made with a special very resistant fabric (Anya’s outfit is more resistant). It protects them from low piercing damage (bullet, knife, syringe, dart, …). The fabric is made with a dna.
Frizia can generate and manipulate ice. She has the ability of cryokinesis where she can freeze anything around her and can also turn her body into ice. In this manner she is able to quickly form a great variety of ice structures, including projectiles, shields, ladders, baseball bats, etc. She often makes ice slides which form rapidly beneath and behind her feet, moving her along the slick surface at high speeds. Frizia is also able to reconstitute her organic ice form if any part of it is damaged, or even if it is completely shattered, without permanently harming herself. She can temporarily add the mass of a body of water to her own, increasing her mass, size, strength and resistance. There is a living ice layer on her costume.
Firia can generate and manipulate fire. She has the ability of pyrokiniesis where she can heat or burn anything around her and can also turn her body into fire. She can heal herself by burning object near her. She can generate flame and heat as well as being immune to both. She can generate flame in order to fly (up to half of sound speed), surround herself with a fiery sheath, and to project blasts of fire. She can temporarily decrease her body mass, decreasing her size and increasing her speed and agility. There is a living fire layer on her costume. 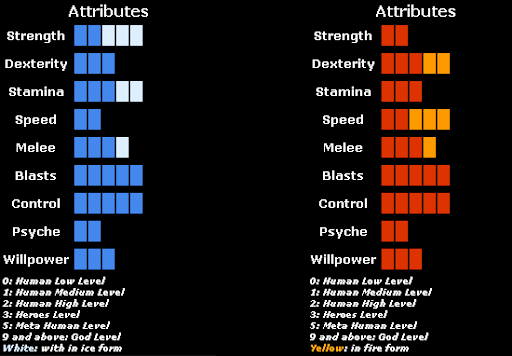 They share a permanent empathic and telepathic link. In a fight they are perfectly synchronous.
They can combine hers powers and manipulate steam. They can turn into steam form and become intangible. They can create a large haze, freezing haze or burning haze.
Weaknesses :
Not focused, they can not use her superpowers.
Her link, they feel the same thing at the same moment. When one of them is hurt, the second one feels the same pain.
They are afraid by syringes.
When they combine her powers, they share curse, disease, poison and drug.
at Tuesday, July 20, 2010