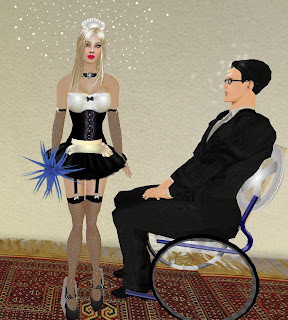 Anya Storm was patrollong her city when she saw a disturbance. Two muggers were attacking a poor man in a wheelchair! Anya leaps into action, shocking the fiends with her electrical powers.

"They won't try that again!" Said Anya. She went over to the victim and helped him back into his wheelchair.

"Can I help you further, Sir?" She asked.

"Please!" Said the poor man. "I only live a few blocks, would you please escort me the rest of the way home safely?"

Anya agreed and even offered to push his wheelchair so he could rest after his ordeal. He agreed. As Anya pushed his chair, she noticed the man was rubbing his temples.

"Poor man!" Anya thought. "Those creeps must have giving him a harder time then I thought!"

When they reached his home, Anya offered to help him inside.

"I have such a bad headache, my dear!" He said. "Would you go into my bathroom and get me an aspirin and a glass of water?"

Anya went into the bathroom and came back with the pills & water, the man in the wheelchair was rubbing his temples even harder like he was casting a spell.

"What are you doing?" Anya asked.

Just then the water glass dropped from her hand spilling on the floor, the pills spilled everywhere as well! Anya felt her mind go blank! The man in the wheelchair had mental powers and was now trying to take over Anya's will! She realized now that she had walked into a trap!

"W-Why are you doing this to me?" Was the last thing Anya said before going into a trance.

"Here me woman!" The man said more coldly. "You are now my slave! You will do as I command, understand!"

The man wheeled over to the hypnotized Anya. In his lap was a sexy French Maid costume. Clearly, he has been planning this for awhile.

"Put this outfit on Anya!" Anya took the outfit and obeyed. She stripped off her clothes in front of the man in the wheelchair and put on the maid's outfit in front of him, giving him a show. He took it all in.

"From this moment on you work for me Anya, and you will stay here forever! Now entertain me!"

Anya danced around the man's wheelchair seductively. Soon she was in his lap, teasing him, the man whispered in Anya's ear and ordered her to giving him a kiss. Anya and the man's lips touched, Anya's tongue did more. Both were locked into a romantic smoldering kiss. That is romantic for the man, for Anya it was just a command she had to obey.

Anya then rose in a cold sweat in her bed! Her hair, skin, and PJ's soaking wet from the ordeal! It was just nightmare.

Anya then got up, but when she looked at the chair across the room, all the color in her face drained way. A French Maid costume was draped over the chair.

Anya then remembered what the wheelchair man said in her dream: "When I call, you will come!"

"It was a dream, wasn't it?" Anya wasn't sure she wanted to know.