Darth Vader has finally converted Wonder Woman. She is now Mistress Sheba, the new Sith Agent of The Empire.
Darh Vader stands behind the former Amazon as she is ready to meet her Emperor.
Mistress Sheba : “Yes, my lord Vader! I must not keep my master waiting!”

Anya sees Wonder Woman in trouble. She doesn’t know the strange dark robot behind the Amazon. She decides to strike hard this foe. If he defeated Wonder Woman, he is a dangerous one. She fires a powerful chain lightening. The dark robot is surprised by the strike and fly away as lightenings damage his circuits.
Anya Storm : “Wonder Woman … what’s happening? Are you ok? What are there clothes?”

Mistress Sheba tries to hit Anya but the blond heroine is too fast. The young heroine uses her inner boost power to accelerate and dodge the former Amazon punches. Anya knows that Wonder Woman is far stronger than her. The former princess is a very skillful fighter, Anya doesn’t find a flaw in the Amazon’s defense.

Suddenly a terrible force strangles her. Anya stops and gasps for air as the Amazon hits her flat belly. Anya opens sharply her green eyes in pain but she fires a lightening bolt. Mistress Sheba smiles as the electricity hit her body. The former Amazon body is too resistant for this weak attack. Anya sees the dark robot using a kind of telekinetic power to strangle her at distance. She tries to struggle but his grip is too strong. She points her hand covered by electricity to the dark robot but Mistress Sheba hits again her flat belly. She sees the former Amazon taking her lasso with a dark smile.

Mistress Sheba slowly wraps it around the blond heroine chest.  Anya knows the power of this lasso.

Mistress Sheba : “You will soon belong to the Empire.”

She tries to struggle in her mind in vain. The artifact is too powerful for her.

Dark Vader : “Good job Mistress Sheba … She will be a good trooper. I’ll convert her and you will support her conversion with your lasso”

Mistress Sheba : “For the empire my lord”

They destroy her will and reshape completely her mind for ever. 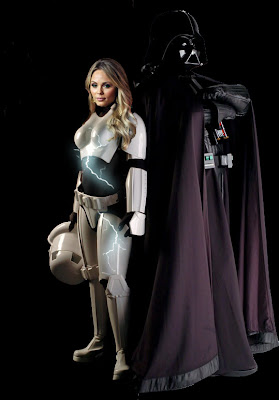 Mistress Sheba and Shuran hail in unison : “May glory be upon The Emperor and Lord Vader.”

(I did that fast ... dont hesitate to post spelling mistake or other mistake)
at Thursday, October 28, 2010